Nassagaweya was surveyed in 1819 with settlers arriving soom afterwards from England, Ireland and Scotland. A Sabbath School was established in Knowles School House (on Hutcheon’s Hill) in the early 1830s; the church was established in 1836. The first church building was a frame building which was erected in 1839. The stone building we meet in today (now a recognized historic building) was built in 1861.

In 1869, 58 people from Nassagaweya established St David’s Presbyterian Church in Campbellville. Nassagaweya and St. David’s operated as a two-point charge (i.e. where two congregations are served by the same minister) from that time until November 2004. Many ministers have served Nassagaweya and St. David’s well through the years. A few names that stand out are: Archibald Blair, who stayed at Nassagaweya/St. David’s for 30 years (1885-1915) during which time the congregation numbered 204 members; Mary Farmery (1976-1979), the first female minister to serve the charge; Desmond Howard (1980-1990), Glen Soderholm (1991-2004), whose gifts and leadership helped us begin the transition into a 21st century ministry and then Sean Howard (2004-2011) and Reuben St. Louis (2013-2022) . 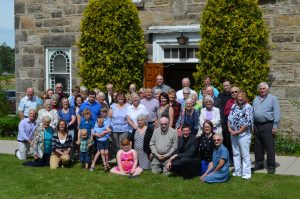 Over the last few years, the congregation has grown to include more families (25% growth), to offer new programs (Trunk-or-Treat, March Break Camp) and to form new partnerships in the community and with other congregations (Week of Guided Prayer, Canada Day Worship Service).  All this growth has prompted the congregation to renovate the fellowship hall in 2018 into a welcoming community space.

In 2023 Nassagaweya called Reverend Brett Main.  Reverend Brett Main is an ordained Minister of Word and Sacrament within the Presbyterian Church in Canada. He graduated with his Master of Divinity in 2022, and his B.A Honours in history from Toronto Metropolitan University (formerly Ryerson) in 2019. He is married to Grace and has a 2 year son, Mortimer. 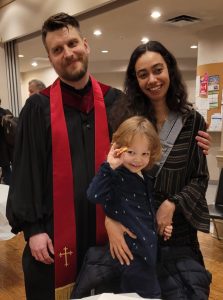 He is thrilled to be out of Toronto and settling in Campbellville!
In his spare time, he enjoys studying history and philosophy, playing music, and cooking for friends and family.

We are thankful for our long history and all that God has done for us and through us here at Nassagaweya but we know that God has more in store. Therefore we are committed to continuing our mission of reaching out to our community with the good news of God’s love. We believe that true fullness of life is found and experienced as fully devoted followers of Jesus Christ, and that God calls the church to connect in a vital and meaningful way with its neighbours and community. We are excited and energized by what God is doing and will do among us.

We are the church